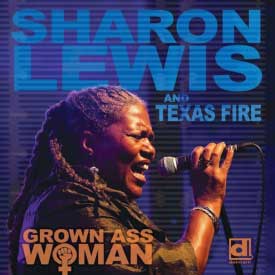 Grown Ass Woman kicks off with “Can’t Do It Like We Do” a tribute to the current Chicago Blues sound and scene. “Hell Yeah!” is a total party jam, there’s plenty of soul like “They’re Lying” and “Call Home,” and “Freedom” is a timely song which points out that ‘freedom cannot be freedom until freedom means freedom for everyone!’

Sharon’s commitment to the blues has paid off handsomely, as she’s developed into one of Chicago’s hottest blues acts. She’s performed twice at the largest Blues Fest in the world – The Chicago Blues Festival, is a regular at Kingston Mines among other hi-profile blues joints and performs internationally often.
Facebook

Jack Mack & The Heart Attack Horns :: BACK TO THE SHACK Gregg Martinez serves up Bayou Blues and Creole Soul