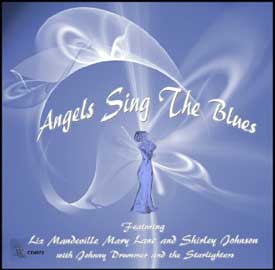 The angels in this live performance recorded in 2007 at Chicago’s Taste Entertainment Center are truly the voices you will hear when real angels sing the blues. Divas Shirley Johnson, Mary Lane and Liz Mandeville serve up a funky batch of uptempo and slow blues with an attitude, Chicago style.

Backed by keyboard player Johnny Drummer, known as a “storyteller under a groove,” and his soulful band The Starliters, these powerful blues women ease from rowdy and risque, to sweet and soulful and everything in between, — an ensemble of award winning all-stars who could teach the heavenly host what the real blues is all about. Johnny Drummer and his band also take vocal turns on five tracks.

The album also has several studio tracks with an equally stellar backing band of crack Chicago session players. One of the highlights is “Angel From Montgomery,” on which Shirley, Mary and Liz trade off lyrics, bringing a deep blues feel to this classic tune. Mary Lane also does her tune on this album, “Red Light,” with a name drop to Buddy Guy and his Legend’s nightclub. Angels Sing The Blues is distributed by Earwig Music.

“From start to finish this album is pure power … blues power, overflowing with emotional power that cuts straight through to the heart. .. If you like your music hot and spicy, Angels Sing The Blues certainly fills the bill.” — Bill Wilson, Reflections in Blue