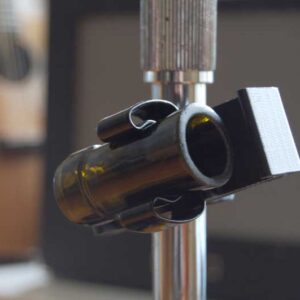 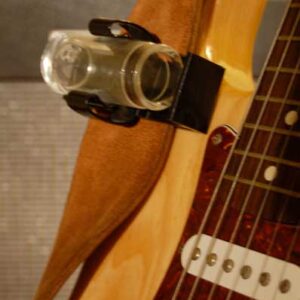 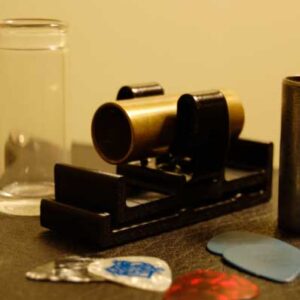 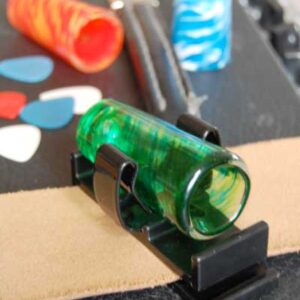 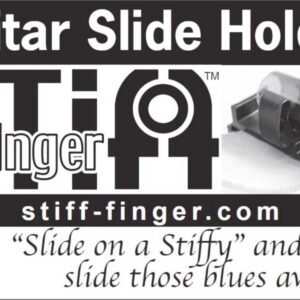 What is a Stiff-Finger? It’s a guitar slide holder. And no one knows what a guitar slide is better than the millions of blues players around the world. This patent pending (possibly a patent by the time you read this) guitar slide holder is changing the way slides are used in Live Blues Performances! The key to the holder is that it allows you to easily access and store your slide during a song. Typically a song played with a slide mandates you wear the slide through the whole song- unless you’re fortunate enough to have a guitar tech to toss it to, but good luck catching it when he tosses it back.

So how does this work you say? Well it’s simple. The holder clips to your guitar strap or microphone stand. You can slide your finger in the slide, as far as you want because of the patented stop on the holder, remove the slide from the holder and slide into a blues lead like your favorite Allman Brothers player. When the slide work for the lead is over you simply clip the slide in the holder and strip your finger out of the slide. There is a patented stop on this end too so your finger doesn’t get stuck in the slide. This all happens in less than a second. Now you ask but will it hold my custom slide? Yes, the holder has been designed as two models, small and large to accommodate any diameter and any length slide – custom or off the market!  Yes, everything has been thought of.  If you have special needs, let me know – that’s how this whole thing got started – an idea that was developed to support players like you and me.

A little history … Where the name came from. I was fortunate enough to meet a founding member of Megadeath that has now moved on to his own musical endeavors. To say the least Chris is a super great guy, and is the most amazing player I have ever gotten to know personally. He has lost the ability to bend his first finger and it slows him down like a fighter jet breaking the sound barrier – None!  So it hit me one day as I was watching him shred on you-tube – and I thought – check out his stiff finger! Then it hit me…  That’s it, when you’re wearing a slide your finger is stiff. Then came the slogan “Slide on a Stiff–Finger, and Slide those Blues away!” What’s next, T-Shirts that read “Slide on a Stiffy” encompassed inside a slide, the perfect sexual innuendo.

Work hard, play harder, and slide on a stiffy, and slide those blues away!